This year (well… week, really – 4 days if you want to be specific – Monday was a Bank Holiday) I have been mostly spitting out sweet storyboards, filthy and quick, for a short cinematic project that will probably only last a month at most. I wanted to keep a production diary of the process, but realised that, due to the nature of the game industry and the Non-Disclosure Agreements signed, all of the work would have to be censored.

I decided to not let that stop me.

So we have been working on [NAME OF GAME CENSORED DUE TO NDA] for around 6 months now, and have got to a certain stage in production where we are starting to think about ways in which to introduce the enemies of the game. My Animation Lead – for purposes of anonymity I will give him a pseudonym, let’s call him DJ Jazzy McJizzle – suggested we needed a video introducing each enemy type. Something that would demonstrate their individual behaviours and powers, something that would show how they should move before getting too deep into the games production.

Now DJ Jazzy McJizzle had written up some short scenarios for each of these cinematic tests, see below for an example of one of these emails.

With this knowledge, I was well on my way to creating a scene, shot by shot, based on the brief. It was nice that the brief was rather vague, allowing myself plenty of room for artistic interpretation, which is, coincidentally, my favourite type of interpretation. I have the bare bones of a story, it was up to me to flesh that out with pictures!

So I got myself a HB Pencil (other Graphite Grades are available) and a wedge of A4 paper (‘wedge’ being the proper collective noun for A4 paper) and started sketching to my hearts content.

Now I don’t mean to blow my own trump, but I think I have a good feeling for cinematic camera angles, timing and pacing. I can’t really describe why, but I knew how these storyboards should feel. Maybe it’s due to an intern power, an eye for detail and visual storytelling. Maybe it’s due to over exposure to film, animation and video game cinematics.

Check out my censored storyboard sketches below.

As you can (can’t) see, the sketches are just that – rough scribbles and many many circles. The compositions in these shots are not perfect, but they serve as a good guide for what I needed. as I mentioned above, this is a very quick turn around, so we like it rough. Rough is good.

Once DJ Jazzy McJizzle approved the overall arc, the individual compositions and the flow of the panels, It was time to transfer these into the computer by force, and finalise the compositions.

Using the ‘fist-through-the-screen’ technique taught in deep Afrique, I used the sketches as guides, and photoshopped the heck out of these little beasts, redrawing the whole thing a quick and filthy as I could, not taking time to make every shot a pristine work of art, but something that suggests form, something that gives the impression of the movement and action of the subjects we are watching. 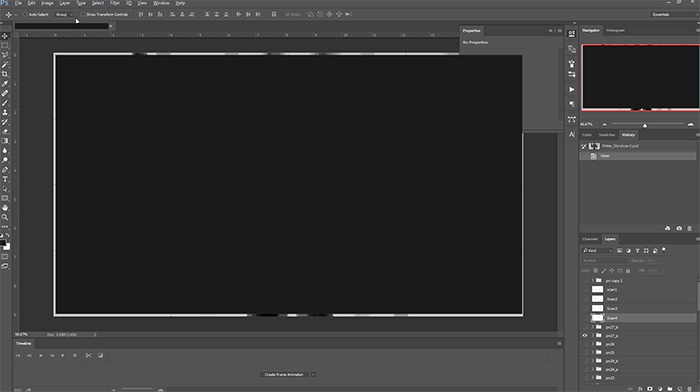 Here is a screenshot of the Photoshop file. One challenge I faced was how to make these panels look good, work effectively, and yet still take no longer that maybe 5 minutes per shot.

Lots and lots of circles.

Scribbling circles has been a form of art since before forms of art were a form of art, and using this technique, I felt one with my artistic ancestors. The idea is that you basically move your Wacom stylus around in circles of varying sizes until it kinda looks kinda like something you kinda want. Then go in with the eraser tool to sculpt it into what you actually want. Finally use a lighter tone to build up more or a 3D form onto the piece. At this point I was at liberty, nay, I was positively enforcing upon myself, the option to lasso, transform, flip, twist, duplicate, motion blur, liquify, all of those wonderful peaches, to get the composition I and feel I wanted as quickly as I could.

One thing I found a lifesaver was a grid. I used a grid in each panel (sometimes even two or three grids, but NEVER 4!) to give me a level headed perspective on life. I transformed the grid into whichever perspective I needed (using CTRL+SHFT+ALT in Free Transform Mode).

This is a good thing to do.

I think I will do it again.

Great examples of grids can be found here:

Once I was happy with all of the panels, I flattened each frame and saved the whole storyboard as a .PSD. Dragging the .PSD into Premier Pro allows you to import all of the layers of that file. Magic.

Then it’s just a case of dragging and dropping the panels onto the timeline and editing it down to feel right, giving the correct emphasis on each panel, making sure the pacing agrees with the action (or lack there of), and trying to adhere to a strict duration limit.

I would upload the 35 second animatic, but unfortunately all of the visuals are under NDA, so you’d be left with the audio only on a black video.

In fact the audio is also under NDA, so I have recorded all of the sounds by mouth for you to listen to.

You know what? This is getting silly. I’m just not going to upload a video.

Needless to say, these animatics went down very well, and along with a breakdown noting what actions are needed per character per shot, we will be using this to capture some motion using motion capture techniques (insert image of self with a butterfly net, lol, like, you know, using the net to capture the motion, as though motion was a physical item or creature that you could catch with a net. Lol. sooooooo funneh). But that’s a story for next week.

GOOD BYE, and HAVE A GREAT WEEKEND, YOU!